Does anyone really have that many stories about funerals? That’s what I was thinking as she told the third story. Was it really the third funeral story? I tried to retrace the steps of our conversation seated there in the convalescent ward. She’d said something about both her son and her husband. That was one and two. Both were funeral stories.

And now, it seemed she was telling a third. 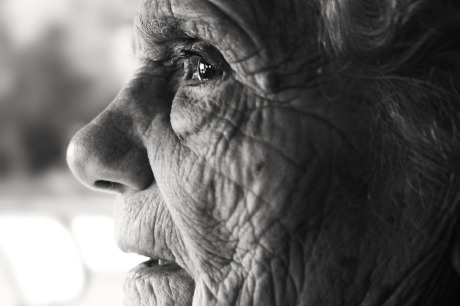 Was it really a third funeral story? Could it be? I shook my head in disbelief as I tried to connect the dots but I was missing something. I hate when this happens. I hate when I’m visiting a sweet old lady and my mind starts to wander so much so that I lose the conversation. And I have. I’ve completely lost it which means that I missed something rather important. What she’s saying now no longer makes sense — and it surely would if I had been paying attention. But, I wasn’t paying attention. I was thinking about my own funeral stories.

When my mother died, there were two funeral services in two different churches with two different pastors with two different sets of mourners. I remember sitting in the front pew. I remember how one of those pastors — the one who had been at my mother’s bedside as she died — spoke directly to me. He told me that God loved me. I remember that but not as much as I remember the stuff that those two separate groups of mourners gave me. This is what I learned about death when my mother died. No one knew what to say so they gave gifts. Every day after my mother died, I was given new selection of trinkets from my second grade classmates. They gave me stuffed animals and chocolates and fashion accessories that would make any child of the 80’s proud. If they were really brave, they hugged me and said they were sorry as I imagine their mothers told them to do. I have heard it said that children couldn’t understand death. Maybe so. But, the children in my class didn’t behave any different from the grown up mourners at those two funeral services. They too hugged me and said they were sorry and handed me something that might make the pain go away. For grown ups, that something was always a picture book with black and white photographs illustrating how some kid’s pet died. I didn’t lose a pet. I lost my mother. For the life of me, I couldn’t understand why these grown ups didn’t understand the difference any more than I couldn’t understand why no one wanted to see me cry.

The other children looked away when I cried in school while my teacher and the other grown ups tussled my hair into a rat’s nest without saying a word. Rat’s nest is something that my grandmother would say. So many years after she died, I’m still saying silly phrases that I used to hear her say. Yes, there have been a lot of funerals. I have plenty of stories from funeral services I’ve led and those I’ve attended, but this always seemed strange.

Normal people don’t think about death as much as I do. Maybe they have fewer stories than I do or maybe what makes you normal is that you actually overcome grief. I never have. It was expected that I would pull myself off the floor, brush off my hands and my knees and shake it off. But, I never did. I couldn’t get over it. No matter how many times they told me my mom wouldn’t want me to be so sad. I am still sad. I still miss her. And it’s not just my mother but my grandmother, my childhood friend Missy, the beautiful 94-year-old woman that came to Leisurely Lectionary every week in the last church I served and too many others to name. There have been a lot of funerals.

I didn’t reach a certain age — sitting in a convalescent home chatting with my new pastor — when I suddenly had so many funeral stories to tell. I didn’t have grey hair or grow up in a war-torn country but I have plenty of funeral stories to share. But, it wasn’t these stories that began this visit. I didn’t talk about Missy or Charlott or anyone else. This is where she began our conversation. Awkwardly lying in bed propped up on a single pillow, with the blue glow of MSNBC revealing the deep shadows on her face, she had started this visit with not one, not two but three stories about funerals. How did we get here? How had this become the topic of conversation after saying hello?

Or is it always the topic? Are we all just waiting for someone to bring it up? To ask us how it is now? To make us feel like we’re not totally crazy for still lamenting over all of these years? Or is it just me?

Because it’s always on my mind.

My grief is always there. I carry it with me with the memory of every funeral — and there are days that that weight is so heavy that I would just love for someone to ask how it is. There is a moment in the 2014 film St. Vincent. Just after the main character’s wife dies, he’s told what any grieving person has heard so many times: “I’m sorry for your loss.” I hate this phrase. He hates this phrase and he says so. “Why do people always so that?” he asks before he demands, “What about, ‘What was she like?’ or ‘Do you miss her?’ or ‘What are you going to do now?’” But, no one asks those questions. They say that they are sorry for something for which they never had any responsibility. They never ask anything more. The conversation is over because they don’t know what else to say. Perhaps there is nothing to say except that I do still miss these people. And I want to talk about them. As in the movie, I want to share how much I miss these people and what I’m trying to do now which is why I ended up sitting in the convalescent ward in the first place.

It was just me.

The visit ended rather abruptly after that. I had said the wrong thing. I had obviously said the wrong thing. It was time for me to leave. I had to go. I raced out of there so fast that I forgot my sunglasses. In the heat of my car in the parking lot, I debated going back in but I was so mad at myself for assuming her question was my question. But, it wasn’t. It wasn’t what she wanted to talk about even after three stories about funerals. Because normal people don’t talk about death so much.

I don’t know what normal people talk about. The weather, I guess. Or maybe what they did on their summer vacation. Maybe all of those essays we wrote in second grade were simply practice for normal conversation. I should have learned these topics then — but I was busy sharpening the tip of my pencil to such a fine point that whatever came from the tip would finally make sense of what didn’t make sense. Those essays became poems and the poems became sermons. It’s what brought me into faith and what called me into ministry. It’s this conversation I want to keep having. It’s this question that I can’t quite answer. It’s this reality that there have been so many funerals and not enough space to talk about how much I miss these people and what I’m trying to do now.

The psalm for this coming Sunday made me want to take my coffee ☕️ outside and marvel at God’s creation.
I read somewhere else in these first few days of the new year an invitation to keep it simple. What we need in times of uncertainty and anxiety is a reminder to be present. That wise person said it better than I just did and I honestly can’t remember where I found this wonderful invitation, but it is what is inspiring this wandering through the psalms for the next seven weeks of this season where we look for light and wonder how Christ might be made known.
As the year ends, I was *that* person who sent an email in this week of blessed rest full of ideas for the whole season of Epiphany.
What a lovely reframing of how to enter into the #newyear from @revjeskast and @emmykegler — join in on conversation! #bibleinoneyear
I never imagined that this is where we would be with a new variant but I dared to dream of what it would like to change our hearts as we enter this new year.
Keep on celebrating! We are only on day 3 after all! #christmasisaseason p
It seems, dear pastor, that difficult decisions are heavy on your shoulders as the omicron variant has its way. I offer my prayers and my hope for your peace in these big decisions and if it helps here is another possibility for your #christmaseve worship on Zoom or otherwise.
It is getting so close to the big day and maybe - just maybe - the countdown has started for your vacation even though you’re still trying to plan worship for those Sundays away. Here’s a little help for Christmas 1 to tell the story and muse over goodness and hope.
Loading Comments...
%d bloggers like this: