Lent starts in one week.  Even though it is as late as it can possibly be, I don’t feel ready. I have been a little sluggish in my planning even though things are mostly ready to go.  I’m stuck on worship — and this is complicated even further by the conference call I had yesterday with fellow alumnae from Union Theological Seminary and our beloved worship professor Janet Walton.  A similar thing happened when we got talking about Advent on this call. Of course, we had that conversation in October where there was plenty of time to think about Advent.  We talked about Lent yesterday — 8 days before the season begins.  Still, it’s good to be pushed.  It’s good to be reminded that worship requires more color and more texture.  So, I’m thinking about what that will look like this season so I can frantically seek the inspiration of fellow church members and see what we can pull off in our worship experience. 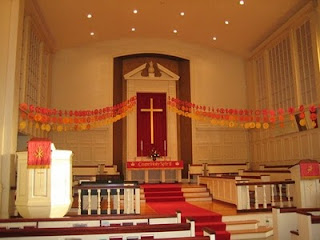 I’m hesitating though.  Let’s be honest about that.  I still remember the Pentecost where some very talented church members took on a huge project which carefully cut symbols that adorned our chancel.  I remember the complicated installation and how much work went into that amazing art.  Don’t get me wrong.  It was amazing.  It was literally awe-inspiring.  I mean, look at it.  It was awesome and captivated the spirit of the season with each breeze that moved through the sanctuary.  The art literally danced.  It was amazing — but that was 2008.  It was the last time I encouraged art in our sanctuary.  Yes.  It’s 2011.  It’s been a long time.  Yes.  I’m an artist myself.  I could go ahead and create something, but that’s not really my style.  I don’t really want to be leading the creativity of our congregation.  I want to be immersed with others in the creative process.  That’s not going to happen one week before Lent.  I wasn’t going to worry about this at all until my curiosity was stirred on yesterday’s conference call.

Obviously, it has to be simple.  There will be no massive art installation, but maybe a little one.  This Lent, our Adult Faith Formation activity at the church I serve will explore death and dying. Using adapted resources from the United Church of Christ’s Faithfully Facing Dying, we’ll consider the ways that we live and die.  This has me thinking about the stars that we used in Advent and into Epiphany one year.  It was our first art installation where we created gold stars adorned by children and adults that hung from our chandeliers in the sanctuary.  Those stars have been tucked away and saved for some later date.


Now, I’m wondering if they might be used in Lent.  Symbolically, it would be different.  In Lent, stars wouldn’t have the same meaning as in Epiphany which Diana Butler Bass describes so well as the symbol of “seeing the light.”  But, as we think about death during this season, it wouldn’t be that different either. As I think of those stars, I think of the ways that we imagine our loved ones among the stars in the heavens.  I think of how that mystery of the stars at night captivate our imaginations with a creative God so much bigger than we are.  And yet, in Lent, when we mark our foreheads with ashes and remember how short our time on this earth is, it’s not just about what is beyond our reach.  It’s about all that is under the stars and how we choose to make more justice and more peace.  It’s about how we imagine ourselves to be shooting stars.  Maybe.  So, what would it be like to sit under those stars in this season and remember that we are called to that possibility.  Though it’s not included in the readings for this season, the Gospel of Matthew talks about the suffering of those days where the sun will go dark and the stars will fall from the sky. What would happen if like in the Ann Weems poem those stars fell into our hands?  Or would that require too much imagination?


I can’t quite wrap my head around how that would work — though I like the idea. Maybe I can figure it out by next year.  The other idea simply requires six purple candles in something that is becoming very popular in many churches, including where my friend Ashley serves.  Ashley talked about this reverse Advent wreath on the phone yesterday. They are using this idea where the candles go out — one by one — as we move closer and closer to Easter.  I wrote words for that idea this afternoon.  I have them ready to offer to our congregation’s version of the Diaconate, though I’m still wondering about those stars.  I’m not sure if there isn’t another idea in me.