What I thought I was going to emphasize this morning in my sermon is the adult education opportunity this summer to study a book together. It’s not organized. There is no time and place to show up if you want to talk about the book. Instead, it’s an opportunity to seek out those people that you’d like to chat with whenever you might want. One church member told me by email this week that she doubts this will work. She maybe wasn’t quite so direct but I heard her concern clearly. 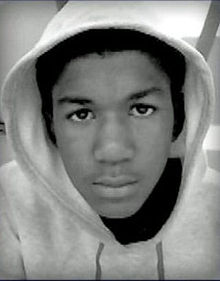 It’s the concern that I have this morning as I wake up to read thoughts and prayers after the verdict was announced last night. Because it feels like the same thing. A teenager went off on his own into the night to get an ice tea and a Skittles. He looked suspicious to the man that was on neighborhood watch. And for this, the young man died. It was self defense, the jury decided. That man on neighborhood watch is not guilty. And people are really upset by this verdict. Some of us aren’t surprised. Some of us question if the justice system ever works. Some of have signed a MoveOn petition to file civil charges against George Zimmerman. But, most of us don’t know where to turn. We don’t know who to talk to. We feel like we have no power whatsoever.

I want to put that sentiment into the lawyer — this expert in the law. He knows the law. He knows what is right and fair, but it’s not working and he really wants to know how to have a deeper relationship with God. This isn’t just a debate the sake of a debate. He’s at that point where he’s asking questions that we only seem to ask in the hospital: Why me? Why now? Why this? (This quote makes so much more sense to me now than it did earlier this week.) And this lawyer really wants to know, “And who is my neighbor?”

And Jesus tells him a story about a man (or perhaps a boy) who doesn’t get any help. He’s stripped and beaten and left for dead. Pretty much exactly how this poor lawyer feels. Stripped of his sense of safety and even in the way things work. Beaten by a system that he’s been trained to believe works. Left to feel totally alone and nearly dead wanting more than anything for someone — anyone — to come along and lend a hand. Wanting for someone to see his humanity and help him up. Wanting to receive some kindness. In the way that the story is told in our sacred text, it’s the last person you would ever expect or want that come along to help. For Trayvon it would actually be George Zimmerman. That sends chills through me. But, it’s that. It’s the person you can’t imagine trusting, never mind needing help from. That person comes to help you.

The message is pretty simple (impossibly hard to do, but simple): if you want to feel God’s presence, if you really want to feel that kindness, you need to allow yourself to get uncomfortable. In the way this story goes, this sounds passive. You just wait for help to come along — and then when it finally comes from the last person on Earth you ever would have wanted, you receive it. I don’t want to sound too jaded, but you could be waiting a long time. What’s more: you’re not alone. There is someone else that is asking those exact same questions. There is someone else that feels as stripped and beaten as you do. Why are you waiting in a ditch by yourself? If you believe that change is possible, that we could live in a world where every neighbor might feel safe and protected, it seems to me that you can’t just wait around for someone else to inspire you. You gotta seek that out yourself. You gotta ask the questions that everyone is afraid to ask. That is how we will go and do likewise.

This is what love does. It is what love looks like. It is what love feels like right now. #lovethyneighbor #lovethyneighborhood #maskup #wearamask
Thank you to @theunapologeticstreetseries fir this blessing and reminder. God bless every last one.
How are you finding words in these days, dear pastor? Do they flow in endless song or are you struggling to put coherent thoughts together?
Some prayers need nothing complex to speak truth. I do not know the original source of this but I’m grateful for the words to my own prayers.
Right now, I’m in Paris with my family and we walked by Norte Dame today. It is still closed after the fire 3 years ago. You can hear the craftspeople working to rebuild. It will take longer than anyone wants.
Dear pastor, I know that some weeks you step into that pulpit and you feel like you’ve got nothing but crumbs. Nothing is fully baked. Nothing feels like it will ever rise. I get it. I’m having one of those weeks.
Earlier this week I shared some ideas for more backpack blessings following last year’s Pandemic Backpack Blessings.
There is healing in the midst of variants and confusion. There is art to be made and wonder to behold. Join @reveverett in this inspired project by sending her salvaged cotton masks. #wearamask #artsaves
Let’s make #bananabreadtherapy a thing for churches this week!
%d bloggers like this: