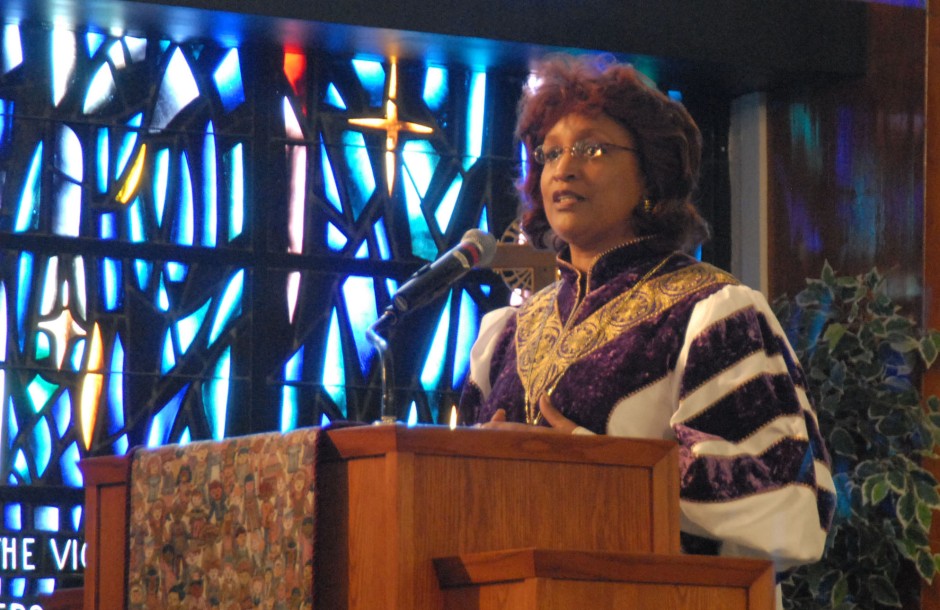 Last month, when this video appeared on Facebook, I was amused.

I laughed out loud but it didn’t feel like my story. Not anymore. There was a time in my ministry when I heard these comments said every single day. There was a time when I felt like I needed to fight for the rights of women to lead in the church with every good bit of exegesis that I could muster from Paul’s would-be mandate that women should be silent. But, it hasn’t felt like my fight anymore. That is, until Sunday.

I had heard that this little church had had some hesitancy about hiring a female pastor. It was said in passing once or twice before. Even if it hadn’t been voiced, I could see in their history. They had been blessed by countless women who have preached and presided in the years since their beloved pastor died but they had never, ever hired a woman to lead them. Until Sunday, I hadn’t thought much of this. There could be a thousand reasons of this. After all, in the United Church of Christ, according to the 2015 statistical report, 47.9% of all active, non-retired authorized ministers are female.

Until Sunday, I wasn’t especially worried about the majority of men holding that 52.1%. It was on Sunday that I heard both the fear and the welcome of women in ministry. It wasn’t the focus of the conversation. But, somewhere in the middle of discussing John Dorhaurer’s Beyond Resistance, we got onto inclusive language. That was when the dear 90 year old woman seated beside me told me that she didn’t think that women should ever lead. She didn’t think that women should be pastor and she didn’t think that a woman should be president. It was then that I heard every hesitation about women in leadership that had bubbled under the surface.

So, I asked this dear 90 year old woman why she felt this way and she struggled for an answer. She told me that that was how it had always been and she didn’t understand why it needed to change. Even so, she saw that it was changing. Everything around her is changing so much so that she kept repeating the question, “Why can’t I change?”

On the third or fourth repetition of this question, the conversation within that small group turned to my leadership. It wasn’t about women’s leadership but what I brought to this group of people. I get up each Sunday to preach but I do not like being the center of attention. I hid under my book as they started listing off my strengths. I didn’t want this to be all about me but I heard every word.

They were ready to not like me. They were ready to reject me on the fact that I was a woman. And yet, there is something different about the way that I lead. They’ve noticed that only in these few months that I have been their interim pastor. I preach differently. I ask more questions. I want to know what they think. I don’t assume that I have all of the answers.

When that dear old lady asked again, “Why can’t I change?” I told her she didn’t have to because it is enough that she loves me. There is some truth in that but it is not enough to love only those that you can see. It is not enough to celebrate the strengths of those that God puts in your way. Until Sunday, I did not realize how comfortable I had become with my own privilege.

In that same 2015 statistical report, it states that over half of co-pastors (51.5%) and interim / supply pastors (53.4%) were female, and over two-thirds (70.3%) were associate / assistant pastors. Next year, I will be counted in this percentage. I am so grateful to have meaningful work but that is not true for every woman. There are women that can’t bust through the stained glass ceiling because the local church refuses to celebrate the strengths of women in ministry or the gifts of people of color or the gifts of LGBT pastors.

In his book, the same one that was supposed to be the focus of our conversation that Sunday, John Dorhauer makes the point that autonomy is what will kill us. Autonomy is what allows every congregation to dismiss women’s leadership. There is no hierarchy to insist that God might be up to something. There is no one to hint at the strength of women because the “basic unit of the life and organization” in the United Church of Christ is the local church. Nothing in the denomination’s Constitution and the Bylaws “shall destroy or limit the right of each Local Church to continue to operate in the way customary to” the local church. Until Sunday, I had ignored that this is still my fight. It’s still my struggle. It’s still my task to push through the stained glass ceiling (and every other ceiling) by reminding myself and everyone else that yes, yes, you really do need to change.

Talk in the Kitchen